Copies of Shadows arrive! Release date is just around the corner… 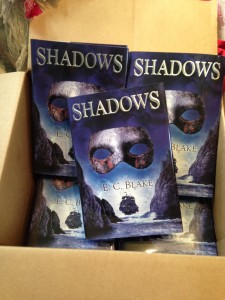 Look what I got in the mail today…coming to a bookstore near you August 5!

Here’s the copy from the front flap:

In Masks, the first novel in The Masks of Aygrima, Mara Holdfast’s life changed forever. As the daughter of the Autarch’s Master Maskmaker, she had a clearly defined future: working with her father to make the Masks that must be worn by all adults–Masks imbued with a magic that would reveal any treasonous thought about the ruling Autarch. But when her own Mask cracked and fell to pieces during her Masking ceremony, Mara was exiled from everything she once knew. Rescued by an underground rebel group known as the unMasked Army, Mara was recruited to their cause when she learned the shocking truth about the Autarch’s reign. In a moment of crisis, Mara drew upon a volatile magical talent neither she nor her allies could understand or control.

In Shadows, Mara faces staggering new challenges as she struggles to master her terrifying, almost addictive ability to use all types of magic–and to rip magic from those around her to fuel her power.

When Chell, a young man from across the sea, is shipwrecked and washed ashore outside the rebels’ hidden base, it signals the first contact in centuries with the world beyond the borders of the Autarchy of Aygrima. But whether Chell and his people will help the unMasked Army or betray them to the Autarch is very much in question. His arrival, and Mara’s own need for answers that can only be found in the capital city of Tamita, sparks a covert mission to the seat of the Autarch’s power. It is there that an act of unspeakable brutality tips Mara dangerously close to madness…and in the midst of a desperate and bloody battle, she discovers just how horrifying her power can be…

Permanent link to this article: https://www.ecblake.com/2014/07/copies-of-shadows-arrive-release-date-is-just-around-the-corner/