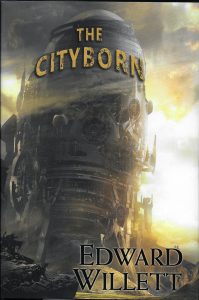 My latest novel (my eighth from DAW Books) is The Cityborn, a stand-alone science fiction tale.

What’s it about? Glad you asked! Herewith, the blurb, followed by some very nice reviews, and a link to sample chapters and buying opportunities.

Two young individuals must uncover the dark secrets of their stratified city in this suspenseful sci-fi standalone.

The metal City towers at the center of the mountain-ringed Heartland, standing astride the deep chasm of the Canyon like a malevolent giant, ruled with an iron fist by the First Officer and his Provosts in the name of the semi-mythical Captain. Within its corroding walls lies a stratified society, where the Officers dwell in luxury on the Twelfth Tier while the poor struggle to survive on the First and Second, and outcasts scrabble and fight for whatever they can find in the Middens, the City’s rubbish heap, filling the Canyon beneath its dripping underbelly.

Alania, ward of an Officer, lives on Twelfth. Raised among the privileged class, Alania feels as though she is some sort of pampered prisoner, never permitted to explore the many levels of the City. And certainly not allowed to leave the confines of the City for any reason. She has everything a young woman could want except a loving family and personal freedom.

Danyl, raised by a scavenger, knows no home but the Middens. His day-to-day responsibility is to stay alive. His sole ambition is to escape from this subsistence existence and gain entrance to the City—so near and yet so far out of reach—in hopes of a better life.

Their two very different worlds collide when Alania, fleeing from an unexpected ambush, plunges from the heights of the City down to the Middens, and into Danyl’s life.

Almost immediately, both of them find themselves pursued by the First Officer’s Provosts, for reasons they cannot fathom—but which they must uncover if they are to survive. The secrets they unlock, as they flee the Canyon and crisscross the Heartland from the City’s farmlands to the mountains of the north and back again, will determine not only their fate, but the fate of the City…and everyone who lives there.

“Willett brings J.G. Ballard’s High-Rise into the distant space age in this dystopian tale of class, power and freedom that will entertain devotees and non-genre fans alike. The worldbuilding in this book is impressive, creating an atmosphere that is both fascinating and oppressive, and characters who are magnificently complex…the ending provides a fascinating study about loyalty and power that grounds this book in our own time as much as the titular city of Willett’s imagination.”

“A novel that doesn’t promise an entire trilogy? Be still our hearts. Edward Willett’s The Cityborn does fill that niche, but it’s a decent read, too…if you’re thirsting for a sci-fi read and don’t want to get tangled up in having to remember plenty of details for more than a single book, The Cityborn should appeal to you.”

“I’ve finally read a dystopian that I’ve enjoyed…I’d definitely recommend The Cityborn, especially for fans of sci-fi looking to branch into dystopian, and for readers like me who are tired of the typical dystopians out there.”

“Dystopian stories are my all time favorite and I couldn’t wait to get into The Cityborn…once things start going, you will be flipping the pages as fast as Alania and Danyl are moving to keep ahead of the Provost. There is a lot happening in this story and it does a great job of building the world we find ourselves in…Overall this is a great dystopian story. It’s my first book from Edward Willett and I hope to read more of his books.”

“This was some crazy shjt. Not that anything is new under the post-apoc/SciFi sun, but the way it was constructed and interleaved with the characters makes it inescapably poignant.”

You can get it here:

Permanent link to this article: https://www.ecblake.com/2017/10/my-latest-novel-is-science-fiction-the-cityborn/