A new teaser for Shadows…

Chapter One of Shadows!

Song of the Sword, Book 1 in my OTHER fantasy series, is now in print!

Got this handsome box of books from Coteau Books yesterday: copies of Song of the Sword, Book 1 of my five-book The Shards of Excalibur series, written as Edward Willett, a brand-new revised edition of a book that first came out about four 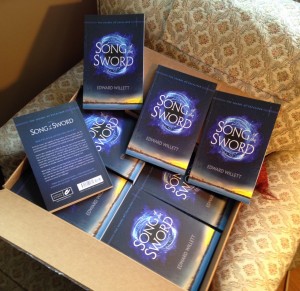 years ago but was orphaned by the collapse of Lobster Press. Book 2, Twist of the Blade, is already written and edited and into the production process–it’s due out September 1. Book 3 will be out a year from now and the rest at six month intervals thereafter, more or less. (Not that they’re written yet…or titled…)

Here’s the blurb from the back of the book:

What if it’s all true, and not a fairy tale at all?

Everyone knows the legends of King Arthur, the Round Table, and the powerful and noble wizard Merlin. But what if those so-called legends are real historical facts, only someone has carefully rearranged that history?

Ariane’s life is already pretty difficult when she starts to hear the singing. Her mother disappeared, she’s trying to get used to living with her aunt after several foster homes, and she’s taking grief from the “in” girls at school. She’s been having strange dreams involving swords and knights and battles, and lately things get really weird whenever she touches water. And NOW, an invisible someone, somewhere, is singing to her.

Before long, Ariane’s met the famed Lady of the Lake, down a staircase in the middle of Wascana Lake, and learned that she’s related. And she’s been set, with her new best friend Wally Knight, on a dangerous mission that pits her against otherworldly forces. Can she figure out what it all means, much less survive the challenge?

The book is making its way into the distribution chain even as I type this–look for it at Chapters or your favorite online store (where the ebook version is also available).

The original version garnered a number of favorable reviews and I know there were a lot of readers anxiously expecting Twist of the Blade, Book 2, to come out in Fall 2011. It’s only three years late…I hope they’ll still be excited. I know I will be!

Permanent link to this article: http://www.ecblake.com/2014/05/song-of-the-sword-book-1-in-my-other-fantasy-series-is-now-in-print/