A glimpse at a real-life Masked city… 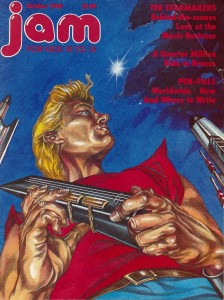 The winner of Week 4 of my great book giveaway was Melinda, who commented on my Edward Willett Facebook page. Now it’s on to Week 5!

Rules are the same: leave a comment below, or reply to one of my Facebook posts, or retweet one of my daily Tweets on the subject, and if your name is chosen next Saturday, you can choose any one of my published books from this list and I’ll send you a copy (provided I have one to spare, which I almost certainly do) free of charge. Just note that I’ll also add your email address to my newsletter mailing list. (Don’t worry, I only send something out every two or three months if that, so you won’t be inundated.)

This week, everyone who enters gets a free pre-publication ebook copy of Star Song, written as Edward Willett.

Star Song grew out of a short story called “The Minstrel,” which was published in the long-defunct JAM Magazine (that’s the cover art, which featured my story, at left) in 1985. It was really the first novel I wrote that I tried to get published, and was almost the first novel I had published: Josepha Sherman, then at Walker and Company, recounted the tale at the 1994 World Science Fiction Convention in Winnipeg (the first WorldCon I ever had the opportunity to attend). She liked the book but thought it needed to be revised and expanded. I revised and expanded it and sent it back, and, she said, she was “ready to make an offer” on it when the publisher of Walker and Company died. His son (I believe) took over–and promptly decreed they would no longer publish science fiction.

Had I sold that novel, my career would have been completely different. Better or worse I can’t say, but different, for sure. Instead, it was years before I sold a novel…and it wasn’t Star Song.

A while back I went through the book and gave it a bit of a polish. And now, thanks to the wonderful world we live in in which self-publishing has never been easier, Star Song is finally going to find whatever audience it can find.

Enter this week’s contest, and you can be among the first to read it.

Permanent link to this article: http://www.ecblake.com/2014/03/week-5-of-my-weekly-book-giveaway-everyone-who-enters-gets-a-pre-pub-copy-of-star-song/